Alexandra Hrinova Pavlovska is an artist and art teacher from Stara Lubovna (northeastern Slovakia) who exhibited with Lemko Jerusalem for the past three years. She studied art and promotional graphic design, and has been publicly showing her work since 1998. Her collaborative project in 2013 was illustrating a children’s book Where The Fairytale Might Live by Peter Karpinsky. I had the pleasure of communicating with her and she kindly provided me with the samples of her work as well as an insight of what she is trying to achieve.

The core of her work belongs to oils, and she divides them into three areas developed continuously. The first one deals with a series of paintings called “Spaces,” characterized by freedom and airiness that enable her to explore the introspective world of thoughts and recollections of dreams. The second area is devoted to reflecting upon her Carpatho-Rusyn roots – the power of blood relations, connections to the soil, and interestingly, folk ornaments acting as artistic outlets of the common people. The third area covers her experiments with depicting the reality that is seen and recorded.

I am sharing two paintings from her Rusyn connection works, and one from the first area of work. 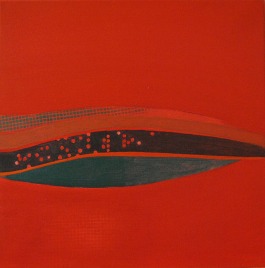