You’re probably curious what it means. Well, it’s a personal impression, really. To me, if you’ve seen a war, you’ve seen it all. During WW II, Kuziak dug trenches, built bunkers and eventually fought in the VI Guard Division of the III Ukrainian Front that joined Red Army in drawing the Nazis out. In 1947 (during Operation Wisla) he was one of the 200,000 non-Polish minority civilians forcefully relocated from southeastern Poland where he lost two uncles to death camps.

Kuziak is a Lemko artist classified within the Rusyn naïve art, together with Stefan Telep, Nikifor, Miroslav Potoma and Michal Sirik. As it is with the rest of the group, Kuziak, too, put his own twist on capturing  his native lands and celebrating everyday moments in the Lemko village where he himself was a farmer. One can discern certain tension in his paintings, developed especially through a slightly rigid rendering of the characters’ facial expressions, and through a sharper line. Again, this is a stylistic choice that makes you aware of the underlying realness of the scene, and not the fairy-tale-like depiction of the village life, because both strain and relief are present. 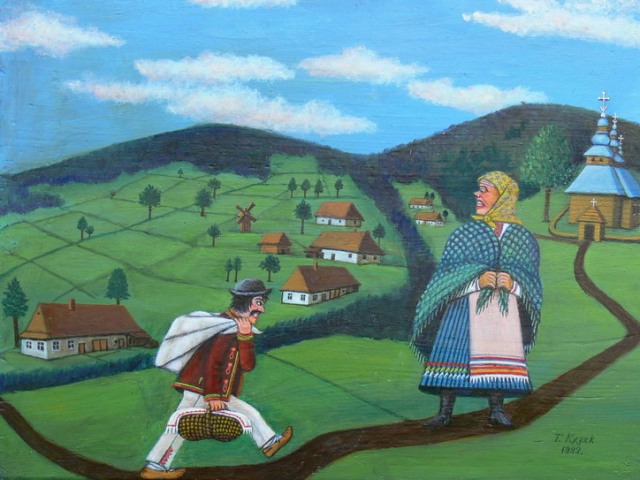